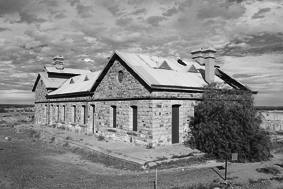 Established in 1893, Cue was once the centre of the Murchison Goldfields boasting a population of around 10,000. It began around the 1890’s when an Aboriginal prospector named Governor found a ten ounce nugget at Cuddingwarra about nine miles west of present day Cue. Encouraged by this find Michael Fitzgerald travelling with two Aboriginal people found gold at the present Kintore Blow on New Years Day in 1892. Kintore Blow is in central Cue close to what is now Austin Street/Great Northern Highway and in the first week yielded 260 ounces of gold. Tom Cue, Fitzgerald’s partner, travelled the 80 km’s to nearby Nannine and registered the claim. It is probably for this reason, that he first registered the claim, the town was later named after Tom Cue.

Then in January 1892 a gleaming reef of gold was found glowing in the morning light at what was to become the town of Day Dawn, a few kilometres south west of Cue. The Great Fingall Mining Company commenced operations at Day Dawn and became the premier gold mine in Western Australia. The Great Fingall mine closed in 1918 but the magnificent stone office building remains on the edge of the precipice of the Great Fingall open cut.

Charming stone establishments still grace the township, making it one of the best examples of early architecture in rural Western Australia. The Gentleman’s Club – now the Shire Office, the Government Buildings –  Courthouse and Police Station are still being used for their original purpose as is Bell’s Emporium. The region is also rich in Aboriginal culture, with several excellent displays of artwork dating back over 10,000 years.

Cue is a small town boasting a number of proud achievements: